This neo-renaissance building with its concert halls forms one of the dominants of the right bank of the Vltava and today it is the seat of the Czech Philharmonic. It was built at the end of the 19th century according to the project of Josef Zítek (architect of the National Theater) and Josef Schulz (architect of the National Museum). It is named after the name of Habsburg Crown Prince Rudolf. Rudolfinum is the first building in Prague, which was built on such a large plot of land (5,315 m2), and which served multi-purpose operation. The building has a total of 80 rooms and halls. The most important hall here is Dvořák Hall, where in 1896 the Czech Philharmonic began its activities with compositions III. Slavic Rhapsody and Symphonies From the New World. This concert was conducted by the composer Antonín Dvořák personally. In 1945, the first concert of the Prague Spring International Music Festival took place here, and its most prestigious concerts are held here to this day. The current appearance of Rudolfinum dates from the time of its reconstruction in 1990-92, which has preserved the appearance of the original building. The attic of the building includes statues of famous composers – Georg Friedrich Händel, Ludwig van Beethoven, Wolfgang Amadeus Mozart, Johann Sebastian Bach and others. Along the sides of the stairs from the square are statues of musical muses and statues of lions and sphinxes. The interiors are also decorated with busts of composers and other works of art. Barrier-free access from 17 November Street is shared with the entrance to the evening box office. 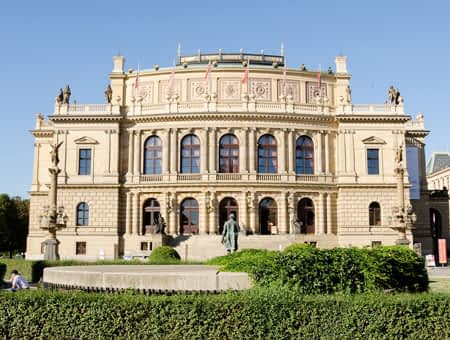